All it took was one handsaw, an “in-law,” and some pink-ribboned gardening gloves.

Oh, and I helped too.

It was Jesse (my sister’s boyfriend of six years — thus the “in-law”) that did the brunt of the labor. It was he who pulled “The Mother’s” root ball out and placed it in its final resting place (the yard waste bin.) It was he who spent another half an hour tracking down and pulling up her many serpentine roots — some of whom seemed determined to get to Orange County before he caught them. It was he, in short, who performed the major part of the surgery.

But first I executed some strenuous, rigorous, and even back-breaking preparatory work. Most of which was useless. But of which I’m still very proud. Modesty not being my strong suit.

First, there was an hour of digging. With a spade. In clay. In the blazing sun. While kneeling on a gold-tinted gift box I’d fished out of the recycling bin. And dodging the thorny arm of the Mother, poised above me like a sword of Damocles, ready to strike should I, for example, raise my head to wipe the sweat out of my eyes.

But after said hour, where was I? Nowhere. It seemed I was moving a teaspoonful of dirt at a time. The roots, if anything, grew larger and more entrenched the deeper I got. They seemed to mock me. “You will never move us,” they intoned. “Never. Neverrrrrrrr…NEVAAAAHHH!”

That was when the earthworm attacked. A story for another time. Suffice it to say that shrieking that loud when MJ is sleeping is sort of counterproductive.

I would probably still be out there a day later, digging away at the same spot, dirty and bleeding, muttering insensibly, had my neighbor Petra not passed by at that exact moment. Petra is German and extremely practical. She has gardeners. I like her.

“It’s a very hot time of day to be gardening,” she said, almost merrily.

I was aware of this. Notice the beads of perspiration on my arms? The red cheeks? The deep squint in the eyes?

“It’s the only time I can get out here.” I said. “The baby’s napping.” This was the short answer. The long answer was that anyone who thinks it’s cute to do yard work with their child in tow doesn’t have a terraced garden full of treacherously thorny plants on a busy street in a major metropolis.

Petra regarded the rose bush.”You know, that’s going to be really hard to get out.”

I took a breath. I knew she didn’t mean to be stating the obvious. I knew she was trying to help. I would not yell “REALLY?”

She continued. “And it comes back if you don’t get it all. I say chop it down, hack at it with an axe, then pour gasoline all around. That’s what my guys do.”

I cocked my head at her.

“Of course, you can’t use that part of the yard again.”

“Yeah, I sort of want to, um, grow something here…” I trailed off.

She pressed her lips together, all practicality. “Try copper.”

“Just drill a hole and drive some copper wire in the trunk. This kills anything.”

It would certainly work on me. My mind races. Where does she think I am going to acquire the tools necessary for all of this…deforestation? Plus, I don’t know how to drill.

I shifted my spade to the other hand. “The Romans used salt on Carthage. They say that worked.”

It was her turn for a blank look.

“Anyway,” I went on, “my sister’s boyfriend is coming over to help…”

It saddened me slightly that, to her, I was so clearly not muscle. But how could I disagree? I had been working on the same bush for three weeks. Sporadically. OK, twice. But still, I’d made no progress at all.

Petra suggested that, to make Jesse’s work easier, I should cut the branches off of the bush, then saw it down to a stump. I told her I would love nothing better, but that I didn’t have the tools. She lit up.

She disappeared into her garage. The rose bush and I regarded each other warily. We both sensed that things were about to change. For both of us. Forever.

Petra returned with a veritable arsenal of cutting equipment. 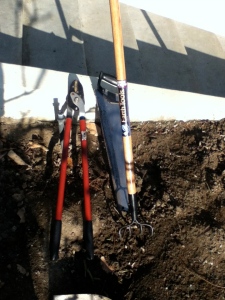 There was a huge pair of clippers (“careful, these will go through a finger like butter”) a handsaw, and more. “Get it to a stump,” Petra said cheerfully. “Then get the boyfriend to do the rest. Oh, and one more thing…”

She ran into the house again. Then she was back.

“I don’t know why they are pink,” she said, regretfully, “and also perfumed. But they will help.”

I sniffed at them. They smelled like Palmolive. Still, my hands did hurt. I own two pairs of gardening gloves, but had been too lazy to go and get either of them from their storage place — four feet away. Easier just to wear these. Plus, it’s a good cause.

I thanked my neighbor and got to work.

Tools. Amazing. Previously intractable branches fell away in seconds beneath the clipper’s relentless blades. Snip! Snip! Butter butter butter! I felt like Cro-Magnon Man with his first axe head. No more hand-splitting for me!

The saw was even better. The bush went quickly from this: 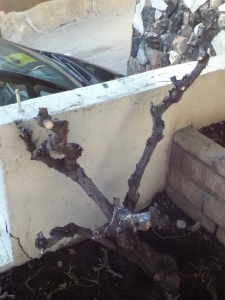 It was insanely satisfying. When the final cut went through and the last bit of trunk fell to the ground, I turned, faced the street, raised my tools, and roared. Quietly, of course.

Then I looked around quickly to make sure no one had seen.

When Jesse arrived with my sister he seemed surprised to find that I had whittled his project down to such, well, stumpy proportions. He even looked slightly disappointed. It turned out that he — kind soul — had planned to replant the evicted bush in a nearby public garden. I encouraged him to try it — with the stump. If Petra was right, it would be a flourishing behemoth in no time. In the meantime, I looked forward to being entirely rose free, and soon!

Abigail and I headed inside, where I peeled off my colorful gloves, washed my hands, and joined my sister in eating more Christmas cookies.

Moments later Jesse came in. He was done. The bush was gone. No gasoline spilled at all.

Carthage, do not weep. I certainly won’t. I’ll be too busy replanting.