Abigail, whom you may remember from her infamous chicken foot stew, has now jumped on the turmeric bandwagon. And, as usual, one-upped me–by mixing her turmeric into a kale-and-almond-butter-based smoothie. Will I follow suit? Most likely not. Yes, it looks delicious. Yes, it packs a bigger nutritional wallop than my simple “yellow milk.” But I’d have to get the blender dirty. This is an insurmountable obstacle for one such as me.

My other sister Lily has also joined in the turmeric craze. She’s on day three of drinking it every day. That the both of them are now imbibing the “magic yellow” (and not the urinary kind) makes me very happy. I get to credit myself with improving the health of 75% of my siblings. Or is it 63%?

Anyway. I have three. Two are drinking turmeric. You get the point.

Now if I can just get my brother on board I will ensure the longevity of my entire family line. Our blood–tinged slightly golden–will flow through the ages.

I will also ease my mathematical struggles. Statistics were never my thing,

As for me? I actually stopped drinking the stuff a few days ago. I know. I have no willpower. I have no consistency. I have no dishwasher! I hate washing the pot. That yellow scum is a bitch to get off! If I hadn’t killed my Gaffers and Sattler with the wrong kind of soap back in October we might be having a different conversation right now. As it is, I think I’m back to just taking a multivitamin.

And saving up for a Bosch. That’ll really improve my health.

I’ve started drinking it every day. I know it’s an eccentric habit, but, considering that a friend of mine recently tried to get me to start drinking my morning urine–and I considered it–I think I’m actually getting less weird by the day. Perhaps the yellow spice will even help with that. It cures so many things–depression, arthritis, inflammation, cancer–that my overweening eccentricity will surely decrease with consumption as well.

I’m making a recipe I found online. By accident, really. I was reading Facebook, and one of my friends was struggling with something, and someone posted that she should try turmeric milk, and the next thing you know, there I was sipping a cup. Because, you know, why should there be a new-age cure I don’t try? Even when I don’t have the disease. Haven’t you heard of prophylactic dosages? (And if you think I’m talking about giving an aspirin to a condom you need to break out your dictionary app.)

I’ve been trying to get Mike to drink it, too. He has a bad back, lots of stress, and a cold. Who’s better qualified for help from a nutritional panacea? Still, you’d think I was offering him, well, a cup of my morning urine. I’m getting about the same reaction. Oh, he drank the first batch, alright. And the second, albeit with greater reluctance. But now that he’s back out of bed he seems to think he’s past his need for my ministrations. When, today, I offered him a cup, he turned his nose up at it. Literally. Sniffing imperceptibly at his foolishness, I poured myself his serving as well as my own.

But I couldn’t finish such a giant helping. Turmeric’s good and all, but not two cups worth. Even when I added prodigious amounts of honey.

Still, I believe that, with this new regimen, my already excellent health is going to improve . Too bad I will smell like a to-go container of sag paneer. Is that even a curry dish? Whatever. You get my point.

At the very least I will not smell like pee. 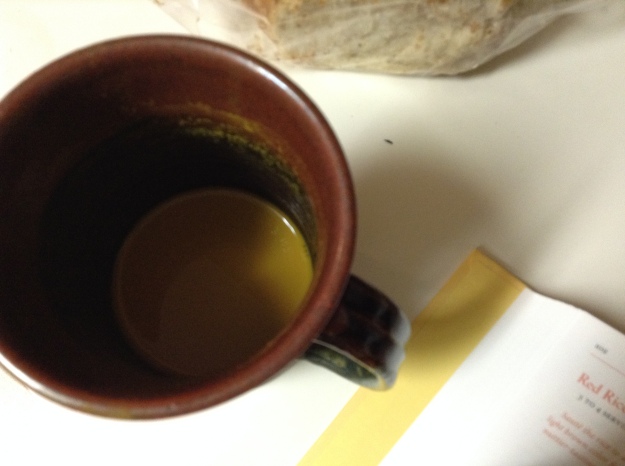