The road to hellish parenting is paved with good intentions.

This morning, for example. After the a lovely trip to the park, MJ and I sat happily back at home eating bagels and cream cheese. Between bites, Myra-Jean, who was quite fascinated by yesterday’s solar eclipse, asked me to explain to her, again, about “the sun and the moon thing.” Having a pen and paper nearby, I decided to draw her a diagram. So I did. I’m no artist, but I think I got the main thrust. 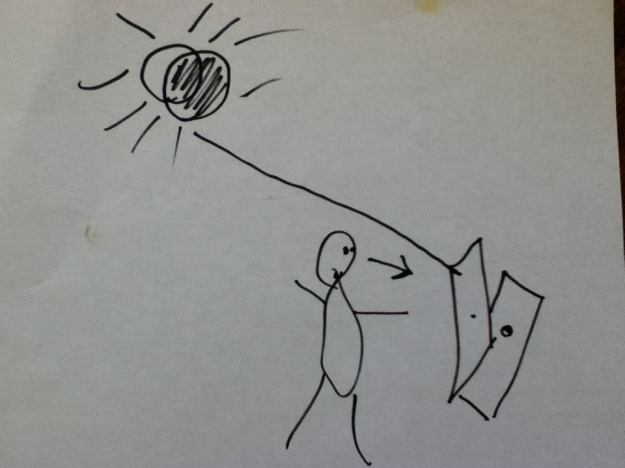 I drew the whole thing upside down. Impressed?

The guy in the picture is Daddy. The thing he is “holding” (artistic license) is a pinhole camera. See the tiny eclipse reflected on the right-hand piece of paper? And above, the real thing? I mean, really, I think it tells the story rather well.

MJ must have thought so too. So she asked me to draw it again.

“Again?” said I. “But it’ll look pretty much the same…” She didn’t mind. So I drew it again, and tried to change it up a little.

I know. There are too many orbs. In my defense, MJ kept asking for more. And there’s Daddy again — eeny weeny this time! — with his pinhole camera. For realism, I’ve given him hair and a beard. Why is he running? Not sure. Perhaps he believes this is the apocalypse. If I looked up in the sky and saw all of that going on, I would, too.

Sheesh. Great audience! I was halfway through my lifelike sketch of Mike, with moon and sun well in the background…

…when I realized that MJ had fooled me into doing something I shouldn’t have been doing. Something forbidden. Something I have been told repeatedly not to do.

I was drawing a picture for my child!

Any conscientious, parenting-book-reading, Waldorf-embracing, “vulva“-using caregiver will tell you that you are never supposed to do this. Not draw figures, anyway. It can give young kids an artistic inferiority complex so all-encompassing, so devastating, so debilitating, that it can take years or even a lifetime to recover. Or so I was recently told, by a woman who has been teaching art to kids for over thirty years. Never mind that, as a child, Beatrix Potter’s own father used to sketch bunnies for her for hours on end. Her later success — drawing those same creatures — is apparently the exception. Most children, instead, will be moved to toss down their burnt-sienna crayons forever. For even the most inept grown-up is capable of depicting things that a child’s limited motor skills preclude them from drawing. To be a good parent, then, one must never, ever, do this.

And I have tried. Oh, how I have tried. How many times have I stood by the easel, refusing to draw more than a squiggly line or a blob of color, while ignoring my daughter’s tearful cries: “please, Mommy, make a horsie!” It’s been heartrending, frustrating, and occasionally counter-intuitive. But I have stuck with it. Until now. Now I found MJ had “snuck one in” — or actually three — on a technicality. Here I was, innocently believing I was giving her a science lesson, when all the while I was actually chipping away at her self-confidence, her artistic integrity — perhaps her very essence. As if forgetting her sunscreen this morning wasn’t bad enough! Is there a worse parent anywhere?

Trying to make up some of the miles of ground I had just lost, I led MJ to the easel. “It’s your turn,” I said firmly. “Can Myra-Jean draw an eclipse?”

Myra-Jean glanced at the three pictures just produced, now lying shamefacedly on the dining room table. “Clearly you can,” her expression said.

“How about this,” I offered. I took the paintbrush and placed a dot on the page.

Myra-Jean burst into tears of frustration. “Mommy, no! MAKE ME AN ECLIPSE!!”

I turned to her, smiled forcedly, and snapped my fingers. “Presto! You’re an eclipse.”

Comedy is somewhat lost on toddlers. This went over like a ton of bricks.

Five minutes, and five thousand tears later, I drew what MJ wanted. The moon, the sun, and even Mike. In my fury of guilt and remorse I forgot the pinhole camera. Still, I had done it. I had added insult to injury, aesthetically speaking.

Myra-Jean seemed totally satisfied. So what if her father looked alarmingly like John Lennon. She didn’t know from the Beatles. I, on the other hand, felt horrible.

The phone rang. Resisting the urge to answer it: “Failure’s residence!” I picked up and said hello. It was a friend. Leaving MJ in the kitchen, I moved into another room so I could talk more freely.

Five minutes later I returned. I found Myra-Jean at the easel. She was painting. Right over my latest opus. She had covered every mark on the page with blobs and lines of her own. Little remained of John Lennon, or the sun. The moon was gone completely. And the whole thing looked good. Really, really good. In every way, it looked better than it had before.

I walked to the easel and stood next to Myra-Jean. She stuck her finger into the center of a yellow blob and pulled a “ray” wetly across the page. Then she looked at me proudly.

And with that, it was naptime.

Fortunately the next solar eclipse isn’t until 2017. I figure by then Myra-Jean’s creativity might have recovered. If not completely, then at least for the most part. If not, I suppose it’s not the end of the world. She doesn’t have to be an artist, after all.

She can always study astronomy.