Walter is many things. Smart isn’t one of them.

I know, cats aren’t generally known for their perspicacity. Still, even graded on a gentle curve–heck, on a horizontal line–he’s not a bright bulb. I’m not even sure he’s plugged in to the socket.

There’s no other explanation for his behavior. The creature is ridiculously docile. Mellow. Calm. He barely plays. He never runs. He doesn’t like to leap. He just wants to cuddle. Nothing irks him. He gets hauled around by my daughter like a half-poured bag of rice; he never says a word. She uses his paws as pointers when we’re reading books. He purrs. She thinks it’s funny to twist his head like Linda Blair–I can’t tell you how many times I’ve uttered the words “stop choking the cat!” And nothing. Just that droopy-eyed bliss look. Or maybe it’s shock. Either way. He should be standing up for himself. Biting her. Yowling. Hell, I’d understand if he packed up and left in the middle of the night. But no. He’s absurdly forgiving.

Which leads me to believe that he must have hit his head when he was a kitten.

He’s also not eating his wet food. Unless it’s at room temperature, which is a third of the time. If it’s cold? No sir. Guess who’s been getting a lot of left over, semi-ossified veal with green peas? The dog, of course. Who is rapidly starting to see the benefits to this whole cat-ownership thing.

Anyway. I know what you’re thinking. He’s sick. I thought so too. But he has no symptoms. And he’s seven months old. How many illnesses has he had time to accumulate? Do kittens get chronically ill? Is this going to end with us in some feline pediatric unit? With little furry candy stripers?

The adoption lady doesn’t think so. She says he’s probably just adapting. And he may just be calm. As for the food? No problem. If we open a can of tuna and “drizzle the oil on his wet food” he’ll eat. Um, OK. That won’t be expensive. Not to mention, who the hell is going to eat the leftover fish? With mercury levels where they are, we’re only supposed to have it once a year. Was this done for him in his foster home? If so, I wonder what they did with the leftovers. Maybe they just fed him the whole can.

Or perhaps it indicates that he’s not so dumb after all.

Whatever the case, he’d better start eating. He’s going to need all of his strength at our house. 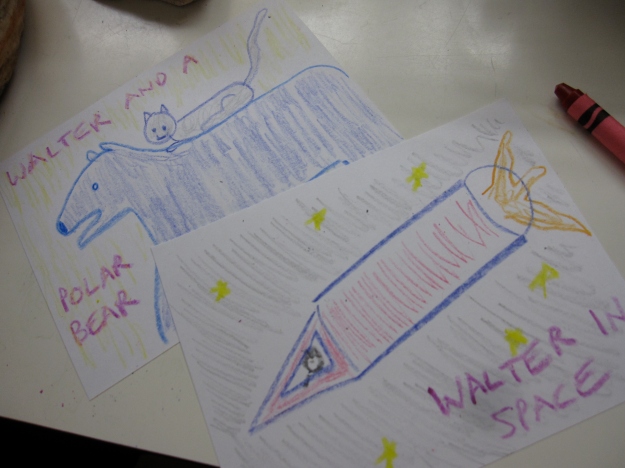