As if coping with my feelings over MJ’s starting pre-school — and Mike’s cruel “sunrise, sunset” jibes about it — were not enough, now this. A letter. In the mail. With devastating news:

My adopted chicken is dead. Dead! Talk about your sunsets. Sob!

OK, let’s be honest: there’s only one reason I was still supporting little Snowball — for that, the letter reminded me, was my feathery charge’s name. I couldn’t figure out how to stop the monthly deductions from my bank account. Oh, I could’ve called Farm Sanctuary, but that required time. And organization. And speaking to a person whose love of mis-treated livestock was deeper and more pure than my own, and who would, therefore, try to talk me out of disinheriting my clucking friend. It was just too much work. So I put it off. And off. And have, as a result, been keeping Snowy in the corn for well neigh — sorry, nigh — five years. It was just ten dollars a month. Still. It adds up. To — yikes! — $700!

They’d better bury her in a jewel-encrusted coffin. Because as I said, she’s dead now.

We are very sorry to write with news that your adopted hen, Snowball, has passed away. Although we are deeply saddened by this loss, we are grateful to have known this special hen and thankful that her death was a peaceful one.

After providing a great deal of back story — Snowball was a lab chicken, got rescued, “spent many full, happy years at the shelter,” blah blah — the letter goes on to reiterate that she “passed gently during the night.”

Thank God. There was a chicken at my daughter’s school who wasn’t so lucky. Someone forgot to put her in one evening; the next day she was found in a state that denoted, let us say, a rather unquiet passing. Think raccoon; think strewn feathers; think dental records — if they existed for birds. 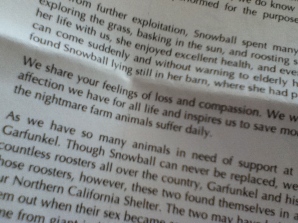 Anyway. Back to Snowball. Having recovered from the initial shock, I continued reading:

Was I having those? I was now. Sort of. Fortunately, there was immediate relief. Another chicken — this one a rooster — had been made available for adoption. In fact, the deed was done. This letter was my notification. Having hardly had time to grieve my loss, I was given a new life to celebrate, a new poultry to love, another sunrise to exalt in! What a roller coaster ride! Eat your heart out, Ecclesiastes.

In the next paragraph I was introduced to Garfunkel. A bird abandoned and “cast out” — as so many roosters, apparently, are — due to his gender. Fortunately:

Garfield is safe, now, from such perils. Never again to be rejected because of what he isn’t…Garfield will ever more be loved for who he is.

Tears of sorrow, tears of joy, tears of shame for the injustices of the world. I assume those were all expected. I provided none of them. What can I say? My heart is a tiny, egg-shaped stone.

The letter closed ever so kindly:

(Note the capitalized words. That makes them more sincere.)

Oh, and, there was a P.S., which pointed out that there is, if I’m interested, a memorial fund for Snowball. For $200 I can place a rock with her name on it in a “Rainbow Bridge” memorial park.

Still, I think I’ll hold off. Maybe when the grief has dimmed. Right now I need time to mourn. And heal. And start dinner. Which is going to be good. Crock pot —

Fine. Busted. Look, I’m sorry. How could I know this damn letter would come today? Anyway, it’s different. It’s just breasts. From Fresh and Easy! No feathers at all! No coop. No fancy coffin. It’s not Snowball, OK?

Sigh. Maybe I should adopt a goat next time. 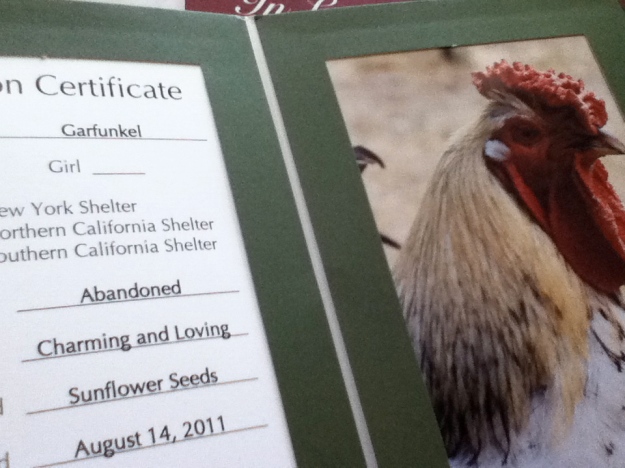