In the end, there was only one way in which my spider class sucked: it sucked my day up.

Or a big chunk of it, anyway. I was in the kids’ section at the library by 10:30 this morning, cramming arachnid trivia from books like “Amazing Spiders,” “Spiders!” and “Aaaargh! Spider!” (Did you know that arachnids shoot a fang-like thing into their prey and liquify their innards before they ingest them? Sort of like buggy slurpies? Yum.)

Anyway. Then there was the prep: ninety minutes of it before class. I know. I’m compulsive. Then clean up was ninety minutes after. More compulsiveness. Plus, glitter is a bitch. I won’t make that mistake again.

The kids seemed to have a great time, no one got hurt, and, best of all, I had the thrill of hearing a five-year-old girl exclaim to one of her friends: “look! I have a spinneret coming out of my butt!”

Up half the night last night worrying. Not about money. Not about earthquakes. Not about war, famine, or pestilence.

No, I was worrying about crafting.

Tomorrow I have to run the AE (Afternoon Enrichment) program at MJ’s preschool. Since we’re at a co-op, there are many ways in which parents get to participate. But this one is new to me, as MJ just joined AE a few weeks ago. Every six weeks, now, it’ll be my turn to “teach” ten pre-schoolers something enriching for two hours after school. Basically, I’ll be responsible for coming up with an idea or theme, running a “circle time” about it, then doing a related craft, singing a related song, and providing snack. Related or not.

I’ve chosen spiders as my theme for tomorrow. Why? I don’t know. I dislike the things violently. I kill them with no guilt. In Nova Scotia last summer I must’ve vacuumed up eighty of them in a single fifteen-minute period. But, a week or two ago, when I first learned of my upcoming gig, I was perusing a book about preschool science experiments and I found a section on arachnids. There was a craft project that seemed not too challenging. I latched on, like a dysfunctional babe at a milkless teat.

Now I’m committed. Overly so, you might say. I’ve procured a spider book from the library, come up with at least two additional crafting projects, and landed upon two spider songs. Neither of them are quite right. One is by Raffi, who should be reliable on these matters. It’s called “Spider on the Floor.” When I finally listened to the lyrics this morning, however, I realized they include the word “dumb” — not OK, Raffi!–and the line “I wish that I were dead.” MJ’s school follows a nonviolent philosophy. An infraction like that could get us get thrown out. Nonviolently, of course. But still.

We’re going to sing “Itsy Bitsy Spider” instead. That should kill ’em in the cheap seats.

To add insult to injury, today I have to make a special trip to Michael’s–my least favorite place–to buy black pipe cleaners for the egg carton spiderlings we’re going to create. Which Mike has been prepping all morning for me–thank God–but which I’m still convinced are going to suck. Then I need to find newspaper for the brown bag Mama spider we’re also going to make. Which is also going to suck. Then there’s the Easter egg hunt. Yes. I know. It’s absurd. But, when in doubt, I add. So, once everything else is done we’re going to go out into the yard and search for  eggs filled with plastic spider rings. This won’t suck, but it is going to seem awfully random.

I don’t know why I’m doing any of this. I’m a nervous wreck. I HATE crafting. I hate spiders. I hate Raffi. I hate it all.

And, just for today, I kind of hate being at a co-op. 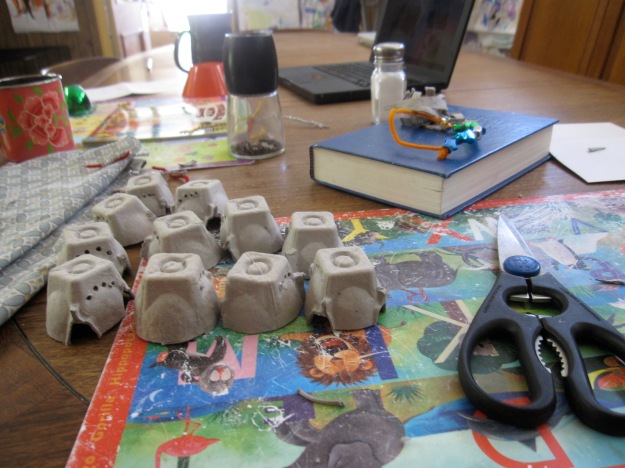