In, the end, of course, the class went fine. True, the birdhouses took up just fifteen minutes of the kids’ time–there’s only so much you can do to two square inches of cheap cardboard. Oh, they drew on them a bit, and glued a couple of pom poms on, but then they moved on to a box of Magna Tiles on the other side of the room. Who can blame them? None of them seriously believed that their completed piece would become the domicile of an actual bird. Even four-year-olds are smart enough to see that. I think it explains their lack of urgency.

Fortunately–because I didn’t have a lot of faith in the first project–I also brought in the ingredients to make scones. As well as my killer, super-secret, stolen-from-a-restaurant-I-used-to-work-at recipe. This part went great–in spite of the fact that I accidentally used wax paper instead of parchment in the oven, which should have been a disaster. In the end, though, you couldn’t taste it, especially after I’d helped the kids slather three pounds of jam on their pieces. Organic, of course.

Anyway, it was a great success. Almost every one of the kids asked to bring a second one home to eat later. Hope their parents keep a lot of preserves around.

Still, I think I should give them the recipe and encourage them to make those for their dads on Fathers Day. 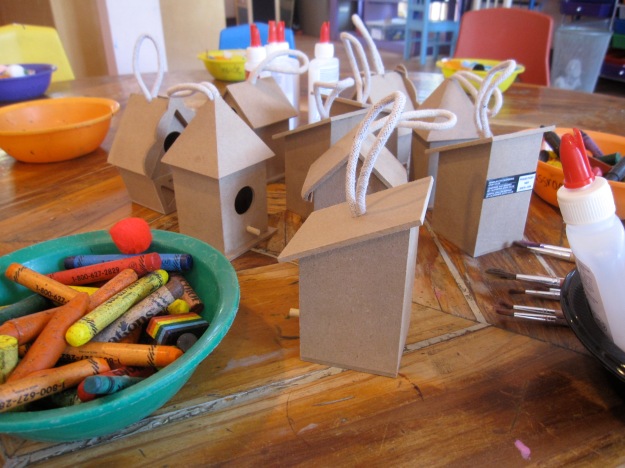 I’ve been feeling less than my usual self lately. I’m attributing it to a mid-life crisis–I took a quiz online and answered “yes” to eight out of ten questions. I’m not having an affair, of course. But otherwise I fit all of the criteria. I’m 45, mildly depressed, cranky, tired, obsessed with having another baby, and experiencing a sudden and overwhelming desire to trade in my car. For a Honda Fit EV. But still.

So I’ve been, emotionally speaking, a bit unstable. Grouchy with Mike, prone to weeping, listless, singing a lot of 1980’s commercial jingles. Who knows why. And I’m stressed. About everything. Mortality, global warming, inexplicable moths in my bathroom…and as if all of that’s not bad enough, I have another round of AE coming up–that’s Afternoon Enrichment, for those of your who missed  spiderfest six weeks ago. I’m a wreck about it. Again. I mean, really. You’d think I was prepping for a ten-year trial at the Hague and not for two hours of crafting with a handful of pre-schoolers.

I blame the mid-life crisis. It tells me, you see, that my life amounts to nothing. What have I got to show for myself? A small family and a wobbly house. Some blog posts, a few CD’s. Oh, and a handful of broken appliances. (With a new one added just today: the garbage disposal. Because I poured MJ’s innocuous-looking cup of “perfume“–which had gone rancid–into it, not realizing that said concoction was loaded with six hundred pebbles.)

Anyway. It seems like so little. Compared to most of the people I know, anyway.

Which brings me back to AE. Because all I can think about is how spectacularly the other parents do it. You should see the “crafts” they come in with! Looms, to teach the kids to weave. Silkworms, to help the kids grasp metamorphosis. They teach them to make artisanal paper, then use it to make books. There is gluten-free baking, vegetable dying, block printing, silk screening. I halfway expect to come in one day and see the kids grinding their own flour. Which they’ve grown, right before class, in their newly-fashioned hydroponic garden. That they mulched by hand and fertilized with fish carcasses that they mashed themselves after first raising said creatures in a hand-blown glass bowl–also made in class–that they later recycled into a terrarium in which they built a microcosmic universe, complete with teeny-tiny galaxies, all made from hand-dyed dark matter.

Then there’s me. I have no fucking ideas. Or I do have some, but they’re all inchoate and utterly illogical. Each possesses a fatal flaw. If only there were a craft that employed those. I’d be so well equipped. Fatal flaw God’s Eye, anyone? Hang it on the Christmas tree!

Oh, I considered making perfume. That seemed like a great idea for a second. It fits the “emergent” theme. It uses natural materials. Engages the senses. There’s a recipe for simple rose water online. But it requires boiling water. And I refuse to bring anything scalding into a group of four-year-olds. Unless its my wit. So that idea is out.

There were others. Many of them. None panned out. So I went to Michael’s. My beleaguered husband offered to take me. I think he was at his wit’s end. I am not quiet about my suffering. I am not subtle. I agonize, vocally and often. Between nervous rounds of “Oscar Mayer Wiener,” of course. These AE classes may be harder on him than they are on me. So to the strip mall we went.

I’m not sure why they were so discounted. Unless it’s their size. The holes in them are so wee that a real bird could never fit inside. OK, maybe a hummingbird. But only a baby. A runt, actually. Still, I bought ten of them. My “students” are going to decorate them and give them to their dads for Fathers Day. I know, it’s absurd. It makes no sense. It’s un-emergent, requires no motor skills, and uses nothing natural. Unless you count cardboard, which is, after all, recyclable in some states. Still, no father in the world needs a tiny, unusable, paper birdhouse that’s been painted, covered with glitter, and dotted with stray beads. No father bird, even. But that’s what they’re going to get. And damn it, they’re going to like it.

Because I’m having a mid-life crisis, and right now this is the best I can do.

“‘Cause if I was an Oscar Mayer Wiener, everyone would be in love with me…” 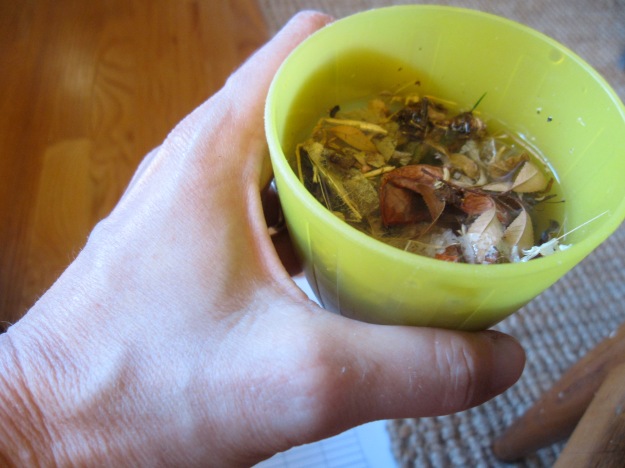 My husband and I are having a disagreement; perhaps you can help us resolve it. Caveat emptor: it’s a little R-rated. At least according to one person I could mention. Who sleeps in the same bed as me. And whose mind is obviously in the gutter…

Yesterday, while MJ was laying low with a fever, she and I decided to take a break from our endless re-readings of Ranger Rick back issues to make something in the art studio. I generally suck at “crafting,” and I don’t much like doing it, but I was all talked out. Our daughter is the only child in America to actively eschew television, so on sick days I become a book-on-tape set to an endless loop. It’s kind of exhausting. Oh, for the relief “Blue’s Clues” could offer.

But art it would have to be. Until my voice came back, anyway. We headed for the studio. Otherwise known as the utility room.

“I want to make a mouse,” Myra-Jean said.

“A mouse?” I replied, sitting down on one of her perilously small orange chairs. “OK. How do we do that?”

MJ cocked her head at me–clearly the slowest kid in class. “Cut one out, and I’ll glue it to construction paper.”

“Just cut it out, Mommy,” she replied, sounding more thirteen than three. “I’ll do the rest.”

Fine. I took a crayon and a red piece of paper and sketched a mouse as best I could: head, Mickey-like ears, skinny neck (do mice even have necks?), simple body, arms, legs, and long tail. Then I cut carefully around the outline and presented my completed work to MJ.

“Thank you!” she said, pleased.

“You’re welcome!” I sang proudly. It really did look cute!

Myra-Jean proceeded to glue the mouse to a black piece of construction paper (why does there seem to be a surplus of this in every  pack?) Next she covered it with gold sparkles. Then she handed the whole thing to me.

And she promptly forgot about it.

Cut to: later that night. MJ is asleep; Mike has come home. Our next door neighbors are also coming home–from the hospital! With their new baby! I realize we should have made them a card. Something cute–by MJ, maybe–to commemorate the moment.

“That would’ve been nice,” Mike agrees.

Suddenly my eyebrows spring up. “I’ve got it! I have the perfect thing!”

I run to MJ’s studio and retrieve the mouse from where it lays on her table. Bringing it into the kitchen, I wave it triumphantly in front of Mike.

He cocks an eyebrow. “What is that?”

“It’s a mouse–duh. MJ and I made it today. We can write “Welcome baby Zia’ on it! We’ll tape it to their front door! Then it can hang in the baby’s room!”

My hand dropped to my side. I jutted my chin at him. “A what?”

I brought the picture back up to my face. What the hell was he talking about? Sicko. It was just a mouse! With a head, Mickey ears, a skinny neck–

Then I saw the tail. Could that be what he meant? I turned the picture slightly. Oh, geez.

“But that’s supposed to be his tail!” I said weakly.

“No way,” said Mike. “He looks priapic. Like a fertility symbol. Like one of those ancient Greek–”

“Maybe I am.” Mike chuckled again, shrugging. “I dare you to give it to them.”

Making a pouting face, I looked once more at my work. Now that Mike had poisoned my mind, the little creature before me had changed completely. Where before he was simple, cute, and wholly unremarkable, now he looked sinister, fearsome, even predatory. His “tail,” once an innocent appendage, now loomed large, libidinous, and alarming.

I looked up at Mike, narrowing my eyes. “I hate you.”

“Hey, I’m not the one who made Macho Mouse, there.” Laughing gleefully, Mike walked off to his wood shop.

“I hope your drill bit breaks,” I muttered after him.

In the end I baked our friends an apple cobbler. As for a card, well, I dashed off a quick note. No rodents in sight.

The mouse, of course, stayed with us. Now that I know what Mike sees in it, though, I’m not sure how long that’ll be the case. I can’t have such stuff around Myra-Jean.

I leave it to you, dear readers. Tail? Or tool? 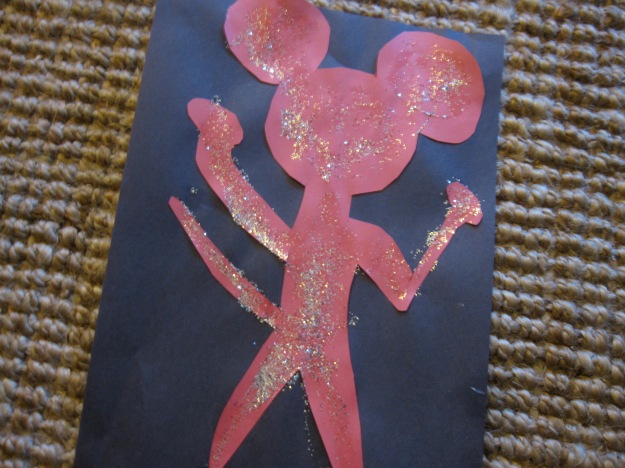