I know the lifespan of the sun isn’t the first thing on most people’s minds right now. Nor should it be. But everything about our local star is a hot topic around here. At least in the under-five population.

MJ’s obsession with space has ensured that we own just about every kid’s book about the solar system there is. And there are a lot of them. We study each one obsessively. Dwarf planets. Gas giants. Sulfuric skies. Jovian storms. They’re all familiar friends by now. (We would happily read about the Big Bang, too, if someone would just write a kid’s book about it. No luck on that so far. Where’s Carl Sagan when you need him?)

Every one of the above-mentioned books, of course, talks about the sun. And why not? It’s the raison d’etre for everything else. Our power source. Our cosmic BFF. We’d be lost without it, the authors tell us. But there it is, up in the sky. Ninety-three million miles away! Don’t look at it directly! Draw it as a yellow circle, and don’t forget the rays. Have we mentioned it’s big?

And that’s where it generally stops.

But the other night I was reading MJ a new space book — one she’d gotten for her birthday. Towards the end I turned the page to find, to my consternation, a chapter about doomsday. More or less. Called “The Death of the Sun,” or something equally dire, it proceeded to describe roughly when said event will take place, why, and what it will look like. It pulled no punches, either. Yikes. Not kid friendly material. Hell, it wasn’t anyone friendly. I stopped reading out loud when it got to the “and then the earth will be sucked into a burning ball of gas and we’ll all explode” part. I’m paraphrasing, but only slightly.

Still. Doesn’t a four-year-old have enough to worry about without having to imagine their home planet being engulfed in a boiling surge of million-degree plasma? It won’t be any comfort to them that it’s happening in a billion years, either. Kids MJ’s age don’t understand time. You may as well say it’s coming “in the middle of carrot season.” Or “yesterday.” Or “a hundred Christmases from now.” It all means the same thing, and nothing, at once: scary, unknown, and very bad for  REM sleep.

When I was a kid–an anxious one, admittedly–I spent lots of time fretting over my apocalyptic fears. Asteroids. Nukes. Quakes. These things kept me awake at night. One thing I didn’t think about–because I had no idea it was possible–was the sun’s eventual demise. Thank God. Watching the New York skyline for impending warheads was bad enough.

Anyway. I’d like to save my kid from similar worries.  I’d like to protect her not only from all painful actual events, but even the thought of them: death, destruction, typhoon, disease. And certainly the end of the world. That, the most of all. Let’s not go there yet. Let her not go there. For as long as possible, anyway. A hundred Christmases at least. Maybe more.

When I open the new book now, I pay attention. I don’t tune out, as I sometimes do, reading to MJ quite coherently while inwardly making lists or adding up fundraising tallies. I stay focussed. When we get to the part about the sun’s demise I slow down. As the vision unfolds I begin to paraphrase, obfuscate, and omit. Then, halfway through the page, I putter out with a genial “and that’s that.”

And we turn to the next chapter.

Am I lying to her? Sort of. Trying to stave off the inevitable? Certainly. Fighting a losing battle? Of course. Still, there’s plenty of time to face the painful truths. There are only a few years left to draw big, bright, yellow suns. Our cosmic BFFs. And don’t forget the rays. 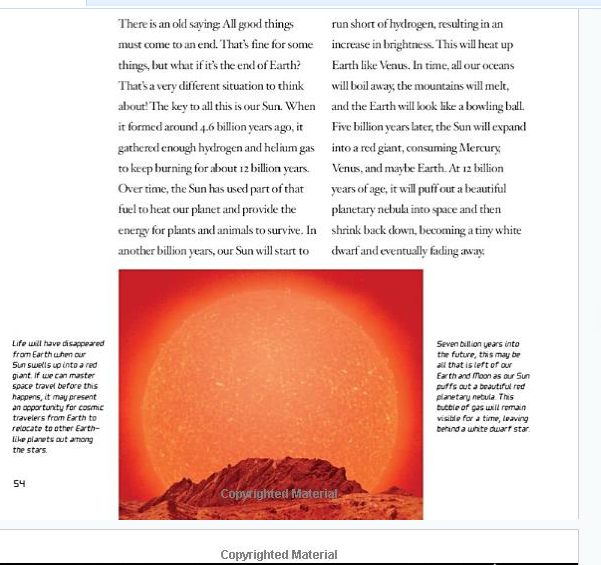 1 thought on “The Sun Will Come Out. Tomorrow?”