So I had a couple of those yard signs. The ones you stick in your grass before elections. The ones that declare your political affinities and instantly alienate half of your neighbors. That kind.

There were two. One for our Mayoral candidate of choice, and  the other for Jose Gardea, our preferred city councilman. How civic I am, I thought, as I regarded them. How involved. I live in a democracy. I have a lawn. Which looks like shit. Still.

Then one day, a week or so ago, everything changed. In one moment, all of my civic pride was torn away like so many M&M’s by a pre-schooler.

I was out with MJ when I got a text from my next door neighbor: “Some guy in a black Prius just stole your Jose Gardea sign.”

What? No way. “But who does that?” I responded.

“Don’t know,” my neighbor replied. “But he looked me right in the eye and threw it in his trunk.”

Jesus. In broad daylight, no less. Could this be true?

It was. When I got home there was an empty space–gaping, mournful–next to my Eric Garcetti sign. The latter waved forlornly in the breeze, as if longing for its companion back. I didn’t know what to tell it. Jose was abducted. Gone. A fallen soldier in the war on corruption and greed.

Feeling impotent–how could one not, in the face of such callous disregard for the first amendment?–I decided to exercise my own free speech. Signing on to Facebook, I posted on my wall: “Someone stole my Gardea lawn sign. Democracy at work.”

And I left it at that. Except for one other bit, where I suggested that the dastardly deed be laid at the feet of the opposing candidate. Or at least his team. Then I left it at that. I knew such venting would do no more good than the lawn signs themselves. But I also knew that, like them, it gave me the impression of doing something. Which was better than nothing.

It was time to move on. I sought a new sign. This proved fruitless. The Gardea campaign was out of them. (To say they’re operating on a shoestring is putting it mildly. A shoestring would be a major windfall for them.)

I’d been thwarted, pure and simple. The bad guys had won. The world was a dark and cold place.

Then, a couple of days ago, something marvelous happened. Something utterly inexplicable. Something kind of miraculous.

It was morning. I’d opened my door to let Mina out–so she could pee, actually, on the very same patch of grass we’ve been discussing–when suddenly something caught my eye. I looked down. There, on my front steps, to my amazement, lay a sign. A Jose Gardea sign. My Jose Gardea sign. It looked terrible–torn, bent, and tattered–but was basically intact. I’d have known it anywhere.

“My God,” I muttered, leaning down and picking it up. “What happened to you?”

If it could have spoken, I felt certain the sign would have told me of atrocities unimaginable. Certainly it had been beaten. Definitely stowed in someone’s trunk. Finally, tossed in a dumpster. The horror.

“You poor thing,” I crooned, cradling it in my arms. Had I owned a Red Cross blanket, I would have broken it out there and then. Then made some chicken soup and tucked my wounded friend into bed.

As it was, I did the only thing I could do. Turning towards the inside of the house I yelled hysterically “Honey! It’s back!”

Mike came running from the kitchen. When he saw the white poster-board with its familiar red and blue font he froze. His eyes widened.

In the end I didn’t bother doing any rehab on my sign. The election, after all, was only days away. There was no time for rest. It had to get back to work.

Shooing Mina permanently off of the spot, I stuck it back in the ground.

And there it waves as we speak–proudly, if a little more raggedly than it did before. If only it could tell me its story.

It’ll have to be content with it telling the neighbors mine. 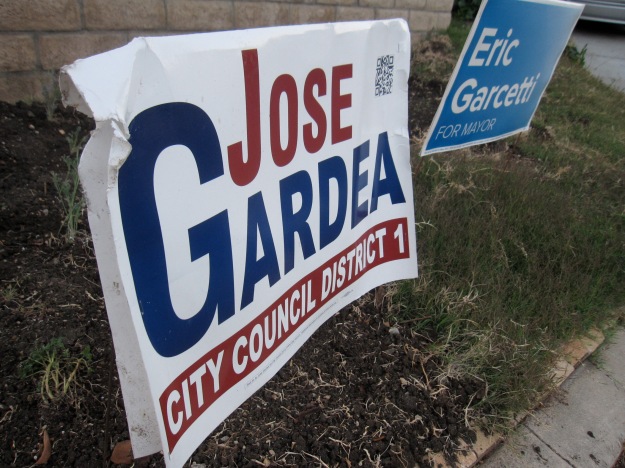