Even before she was born, Mike started calling our daughter “the Prophet Myra-Jean.” I don’t know where he got it–he’s quirky that way–but from the moment he started, he wouldn’t let it go. Being of a superstitious bent, I tried to discourage this appellation. Prophets don’t typically fare well in life. Think Cassandra. John the Baptist. Jerry Falwell. Frankly, I’d rather MJ were a doctor, a supreme court justice, a barista, a giraffe specialist–anything, so long as it didn’t result in being chased by angry hoards. (Which, I suppose, would rule out meter maid as well.)

When we arrived with her at the Santa Anita Racetrack today, however, I began to think twice about my stance on MJ’s “prophetability.” Maybe a little prescience wouldn’t hurt now and then. At least not today. I found myself hoping, as we pulled into the parking lot, that her seerish side, if it existed at all, might poke its all-seeing head out just for the afternoon. Because betting on horses is fun, but only if you win. And winning isn’t something I tend to do. Kids, on the other hand, are inherently lucky–just ask my friends, who’d come to the track a few weeks ago and let their children pick all of their bets. They’d made out like bandits. If MJ happened to be even a tiny bit psychic just imagine how much better we’d do!

We got there just in time to catch the parade before the first race. Purchasing a program for $2.50, we positioned ourselves near the fence and watched as the glistening racehorses approached.

“OK, now,” Mike said innocently to MJ. “Speak up if you think one will win.”

MJ nodded, only mildly confused. I don’t think she actually knows what “win” means. But she’s an easygoing kid. “Just say which one you like,” I added helpfully.

Mike and I looked at each other. He raised an eyebrow and turned back to MJ. “You’ll need to be more specific.”

I pointed to the program. “Tell her their names. Maybe that’ll help.”

“Right.” Mike opened the book to page one. “OK. That one–” he pointed at the lead horse, “is ‘Twisted Purpose.’ See the number one on his saddle? And that one is… ‘Hair on Fire.’ And, let’s see, ‘Saturday Nite Ride–‘”

“These names are ridiculous,” I interjected.

Mike ignored me. He pointed to the next candidate, a nervous bay named Thisonesforricky. “How about him?”

The last horse to pass–a grey filly with a long, high stride–was named “Elusive Jackpot.” As soon as Mike read the name Myra-Jean raised her arm and pointed. No hesitation. Almost in slow motion. Straight. At. The horse.

Mike and I looked at each other and grinned. The prophet had spoken. Sweet! Forget that she had no idea what her words meant. She meant business; it was clear.

With a lilt in our steps we hurried up the steps towards the betting booths. MJ trotted between us, holding both of our hands. “Do one two three!” she shrieked.

We bet $2 on Elusive Jackpot to win. Prophet or no, MJ was unproven; I certainly wasn’t staking her college savings on the first race she called. Not that we have any such savings, of course. But we could! If our little oracle came through…

And we lost. Across the board. Which was kind of remarkable, considering there were only six horses in the field.

After that I declared a moratorium on betting. I don’t like losing money, especially to a horse with a bad pun for a name. I don’t like the sight of hundreds of people staring at their bidding sheets morosely while chewing on their fingernails. And I don’t, it turns out, like admitting that my daughter isn’t psychic. Prophets may have shitty prospects, but they can probably put themselves through college.

It looks like we’ll just have to start saving. Or studying up on the ponies. 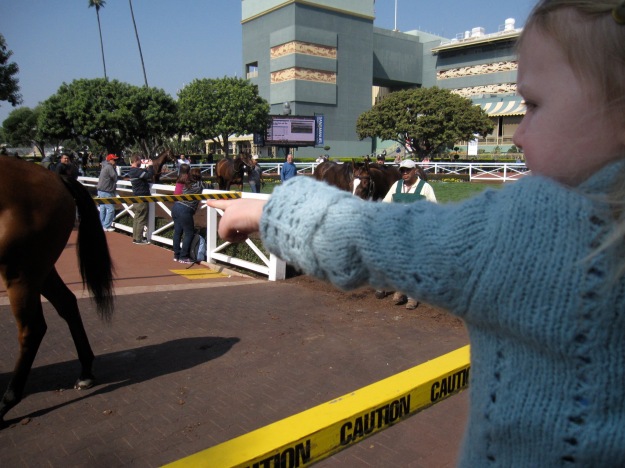