I was doing a bit of weeding this morning — OK, it was while I was waiting for my daughter to get in the car, and I was really just plucking at dead leaves and muttering. Anyway, I spotted something lying under one of our lavender bushes. It was a fragment of a branch from the Japanese Lemon tree; Mike must have dropped it there while pruning last month.

I’ve learned from hard experience that Yuzu castoffs can’t be left lying around. The tree’s thorns are incredibly long and sharp, and, as such, have a habit of going straight through the sole of someone’s shoe. Usually mine. Especially when I’m gardening in flip-flops. But that’s another story.

I plucked it up to throw it away.

Examining it more closely, I found that this particular branch had bigger thorns on it than usual. Like, nuclear-sized. They were dried and sort of hoary, like an old man’s hands, but nonetheless thicker and longer than the ones on the tree. Were the spines continuing to grow after death? At an accelerated pace, even? Yikes. Perhaps a supernatural influence was at work. Or, more likely, an over-zealous fertilizer. Either way, I seriously considered stowing my find in the kitchen. It would be useful for many things: cutting meat, impressing friends, impaling predators…

But I could already hear Mike complaining: “there’s no space for that in the drawer!”

Oh, well. I decided to take a picture of it before I threw it in the yard waste bin. I set it on the garden wall and placed my car keys next to it. To give a sense of scale. But it didn’t really work. Unless your imagination is better — and more dimensional — than mine. OK, look, it was a stupid idea. I had nothing else with me at the moment, except for my daughter. Oh, I considered using her head, but decided at the last minute that holding such a barbed object next to her face might be considered some sort of reckless endangerment.

Anyway. The point is, here’s the branch. And here are my car keys. Do with it as you wish. Just know that I was impressed.

And my shoes weren’t. Thank God. 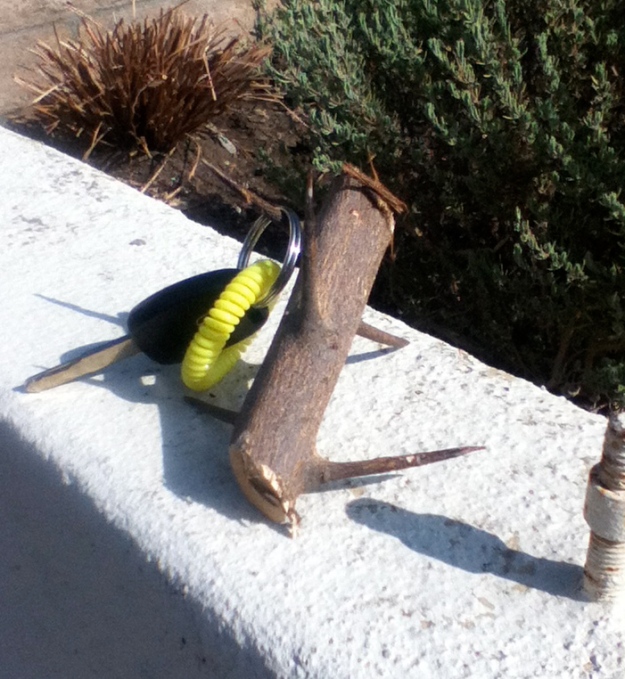