Speaking of things I can’t seem to keep off the floor? These fucking table corners, or whatever they’re called. Here’s where they’re supposed to be: 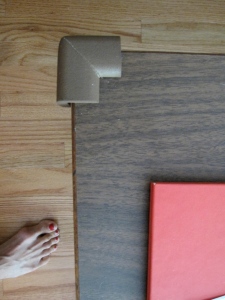 And here’s where they are instead: 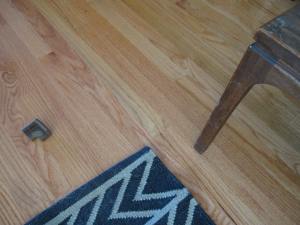 The fucking adhesive. It’s worn off. That “doublestick” tape, which does no such thing. I’ve considered gluing them on, but then they’ll always be there, and someday I’d like our $5 Salvation Army coffeetable to be restored to its former glory. In the meantime, it’s like a game of whackamole. One corner falls off; we stick it back on. Another falls. We stick that back. All four fall. Our daughter careens dangerously around the living room, her skull bobbing vertiginously on its unreliable platform. Horrified, we yell “stop!” and stick all four back on. The next morning, they are all on the floor. Or under the couch. Or in the dog’s bowl. Or a little of each.

Here’s the conversation Mike and I have once every three days or so:

“These fucking things.” Groan. Pick up. “We should just throw them away.”

So they remain. We won’t glue them, nor will be toss them. That’s where we are in the child-rearing progression. Stuck in-between babyproofing and child proving. The corners remain. Here, there, and everywhere. Hopefully they will be where they are needed, when they are. If only we knew when that was. 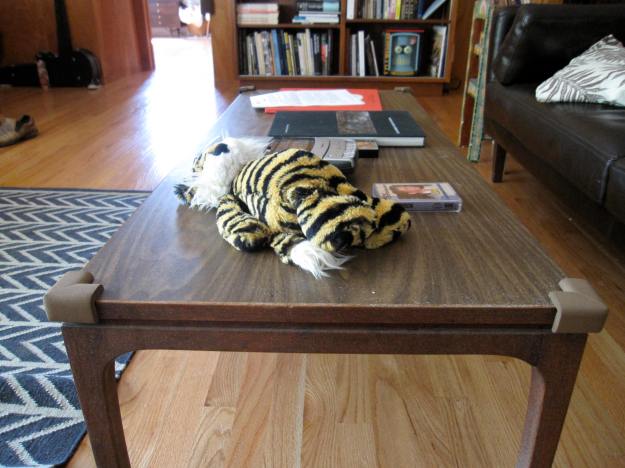