I tried to persuade MJ to let me take her to the zoo this morning — I thought it would be good to burn off as much of her energy as possible in preparation for our red-eye flight tonight. But my daughter had other plans. She wanted to stay home and play with her creatures. The game on tap? “Salon.” Which required, of course, two people. I was assigned the role of haircutter. MJ declared herself my customer.

Or my first one, anyway. Once her hair was done MJ decided to keep me working, and proceeded to produce a rather exhaustive (and exhausting) array of new clients for me to style. Her taste in recruitment was a little weird: none of the customers she placed in my chair actually had hair. Each, in fact, possessed less than the one before. A stuffed giraffe was the most hirsute animal I saw all day. Besides him it was one baldie after another: a rubber duckie, a small, plastic, goggle-headed dog, a rubber goldfish, Eddie the elephant, and so on. She even brought in starfish. I was glad to see him in the mix, but what, exactly, do you trim on such a fellow?

This difficulty aside, our business flowed smoothly. Each client got the same treatment, designed (and largely executed) by Myra-Jean: first, a cloth napkin draped around their necks (assuming they had necks — otherwise we just improvised). This “cape” was clipped on with a clothespin in the back. Next came a head-area dab-off with a blush brush. Next a “cut,” using plastic ice tongs as shears. Then a process called “bubbles,” which involved a selection of colored plastic cups, a short incantation, and a lackadaisical head massage. Finally, MJ asked each client if they wanted a clip for their hair. (This was something she was offered last time she visited a salon; now she thinks it’s de rigueur). They all said yes. Curious George demanded two. Glutton.

At first we used real hair clips — they attached quite nicely to the giraffe’s mane, for example — but after we nearly broke a good one on Eddie’s ear I told MJ we had to figure something else out. We finally resorted to more clothespins. All of the other clientele got clipped thusly, as close to their “hair” as possible.

And, if I do say so myself, each left there quite happy. Some even tipped well. Although the starfish? Turns out he’s a little tightfisted. All five of them. 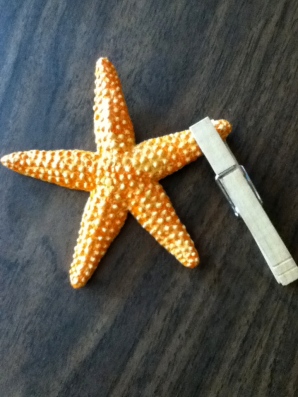