You know those “For Dummies” books? They should make one called “Explaining Natural Phenomena to Your Child Who Is Not A Dummy — for Dummies.”

As you probably remember, MJ has been asking a lot of questions lately about the workings of the universe. Or at least its simpler elements. Mainly, she wants to know why there is night. I’ve tried explaining. I’ve tried demonstrating with onions. I’ve tried drawing spheres, orbits, and sun rays with sidewalk chalk. She still seems confused. So a couple of days ago we went to the library and got a bunch of books. 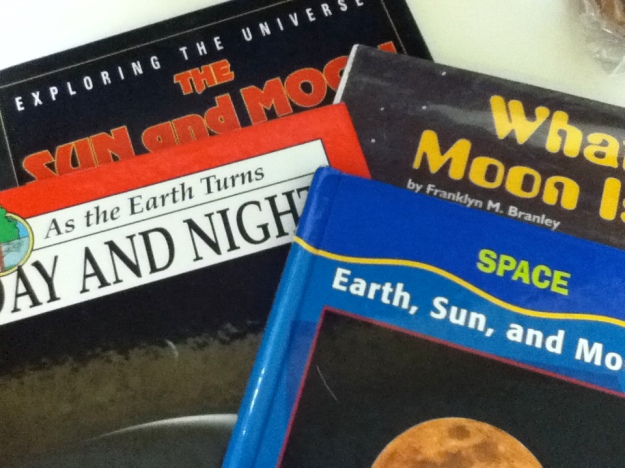 They’re pretty helpful, but now she’s got new questions. I mean, the kid really pays attention! Is the sun a ball made of gas or fire? (One book says the former, another the latter). What’s a hemisphere? What are radio waves? I think I can handle the first two, but the third? All I could come up with was a bunch of stuttering, some vague hand motions, and a mention of NPR. Any thoughts, readers? I don’t think root vegetables are going to cut it this time. And — in case you haven’t guessed it — science really isn’t my strong suit.

One thing? Please don’t suggest Wikipedia. Next she’ll be asking “what’s the internet?”