After lunch today Myra-Jean decided to play “driver.” Sitting in her highchair with a blown-up inner tube around her neck (“the steering wheel”) and two pinwheels balanced on her shoulders (“the seat belt”), she told me she was off to the grocery store.

“Have a nice trip!” I called, my eyes bent on my e-mail. “Stay off the freeways!”

There was a pause. Some quiet fumbling and muttering. Then:

“Wait, Mama. I need my driver’s license!” MJ looked around feverishly for something that would suit. But nothing, apparently looked right. Turning to me for help, she said “where is it?”

I looked up at her. Back at the screen.

OK, I thought. Come on. Get off of Facebook — where right now someone you barely know is trying to get rid of a spare toothbrush — and help your kid with her damned game.

“Alright!” I slammed my laptop closed and leapt up. “Where is it?” I raised my eyebrows and looked around  theatrically.

“What?” she cried, grinning with anticipation.

In my desk drawer, I have a stack of leftover save-the-date cards from our wedding. They have a picture of a Canadian flag on the cover, and fold open to reveal a small paragraph of text. The rest of the inside is blank. One of these, I thought, will do nicely.

I walked over to MJ and handed her the card. She glanced it over.

“Of me!” she demanded. “I want a picture of me!” She held the card out dismissively.

She wasn’t wrong. I was half-assing it.

I took the card back. Bringing it to the dining room table, I picked up a blue marker that was lying nearby. “OK,” I said, sitting down. “Here we go.”

MJ climbed down from her “car” and watched, hypnotized, as I drew, on the inside top portion of the card, her head and neck. Or the best approximation of them I’m capable of. She’s got pigtails today, so I attempted to give her the same in the picture. At first this made her looked more like a water fountain than a person, but when I added extra hair on top it began to resemble a little girl. I sketched in round blue eyes — due to the marker, of course, everything was blue, but in this case it was appropriate — a little nose, and a sideways violin mouth.

MJ climbed up onto the chair next to me and looked it over. She frowned. “No, Mama. Draw the rest of me.”

I started to explain that drivers licenses don’t depict full frames. She wasn’t having it. “Draw my body!” she cried.

I shook my head. So bossy. But — fine. I started sketching, simultaneously firing questions at her. Did she want pants or a skirt? A skirt, she said. Which one? The button skirt. Good. That’s easy enough. I drew it, and turned to her again. Shoes or bare feet? Shoes, she said. Thank God. Digits are not my strong suit. I gave her the same sneakers she wore this morning. She has grown out of virtually every other pair of shoes she owns. The Incredible Hulk of toddlers.

“I need hands, Mama!” Of course. I gave her hands. Great, meaty claws like an overgrown mole’s, but I’ve never claimed to be Da Vinci.

Finally I was done. The picture was big. It took up most of the card. I didn’t know where MJ was going to put her date of birth and all of that, but leave that to the DMV —

My daughter interrupted my train of thought. “Now draw you, Mama!”

What? I told her there was no room. Nothing doing.

I agreed to squeeze myself in — in profile — on my daughter’s left. When I was done with the torso and legs I gave myself one awkward arm, lunging towards my daughter’s back.

“Am I saying ‘stop touching me,’ Mama?” MJ responded.

“Probably.” I sighed. I looked like a man, but with pointy boobs. I sketched in a bit more hair.

Next it was Daddy. No problem. He’s easier. I drew Mike quickly, also in profile, on the right. The beard and glasses gave me more trouble than usual, though. Side views change things. When I was done, MJ regarded it quizzically.

I burst out laughing. He really did. Well, a rooster, really, but who was I to correct her? It was, in fact, a terrible picture of a human, but a very decent rendition of a male fowl. I was almost proud of myself. Move over, Beatrix Potter!

Next she asked for Mina. I squeezed the miscreant mutt in on the bottom. As a portrait it wsn’t bad. But it’s a shame you can’t draw stench. Without it, any portrayal of Mina’s really not complete.

There was virtually no room left. But MJ wasn’t done. She asked for something we could all sit on. I drew a horizontal line. She asked for the housesitter, Judy, whom she only met briefly, but whose presence in our house while we were gone has lent the woman mythic qualities in her mind. I drew Judy as a small woman floating over our heads. There was simply no place else for her to be. When she was done she looked sort of like Tinkerbell.

Lastly MJ requested ice cream. For all of us. This was impossible, as only one of us — MJ — had hands to hold it with. I gave her a cone, then, and told her that the rest of us would simply “have bites.” That is, if the ice cream didn’t drop to the floor. Which it inevitably would, as the cone was dangling upside down from MJ’s fleshy paw. Next up: a picture of a crying child.

Anyway. MJ liked the drawing so much that she took it to bed with her. I snapped a quick picture, though, before she did. Ephemeral items don’t last for long around here, and I have every expectation that the driver’s license will be crumpled up, eaten, or drowned in the tub in the next 24 hours. Capturing it on film guarantees a permanent record of what our family looked like on this day in time:

Clunky, silly, smiling, crowded. Hovered over by angels. With whatever arms we’ve got grasping our favorite prize. 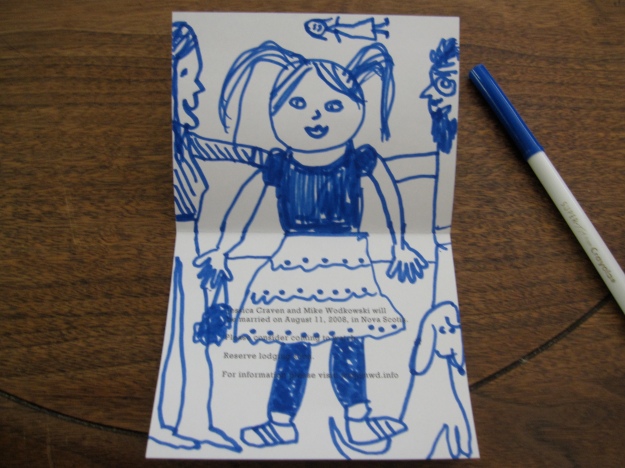 7 thoughts on “Drawn Together”