Mike and I switch off on what we call, around here, “the early shift.” That is to say that we take turns getting up — usually at the blindingly early hour of six AM — with our daughter Myra-Jean. One day it’s me; the next day it’s Mike. Then me, then Mike, and so on. It’s a pretty good system. No one dies of fatigue, at least. Of course we’d both choose sleeping in every day, if we could, but someone’s got to get up with our bright-eyed, bushy-tailed offspring. And the early shift has its own rewards, once you get past the fatigue. (Which you do, with time, activity, and enough caffeine to rouse a small mid-western city.) It has a sameness which is comforting: we read books, we make breakfast, we play games. But there’s variety, too. You never know exactly what you’re going to get. MJ herself isn’t the only element that changes. Books fall in and out of favor. So do breakfasts. And so, of course, do the games.

Lately there’s been a lot of “seashore” played around here. This involves bringing several animals, some cloth napkins, and an umbrella into the utility room. Everything gets spread out on the floor, whereupon we sit down and stare contentedly at “the waves,” (located somewhere in the vicinity of the ironing board). MJ does some “swimming;” I stick my toe in, but I’m not big on the ocean. I don’t know what precipitated the popularity of this game — possibly a “Ladybug Girl” book involving the beach — but I do know that it will come and go like so many others. I will miss it when it’s gone. So I enjoy it now. Even when the floor is hard, the “beach” depressingly cluttered, and the “water” unseasonably cold.

The other activity of choice recently has been playing with legos. Oh, these’ve been a popular play element in our household for ages, but they haven’t, until the last few weeks, been an integral part of our morning ritual. I think the addition of a birdfeeder to the tree outside has given MJ extra incentive to gravitate to the living room. Since that’s where the legos are, that’s what gets pulled out. So we’ve been doing a lot of legos. Which means we’ve been building a lot of cities.

This morning we built “Eagle Rock City.” Which is to say Myra-Jean built (and named) it. I mostly drank tea, uttered encouraging phrases, (“good wall!”), and glared at a squirrel on our feeder.

Once Myra-Jean had gotten a good part of her city constructed she moved some animals in. Also her “red belly,” (a blanket), which has never had its own domicile before. Doesn’t it look happy to be off the streets? Rumor has it it’s moved in with Easter Bunny, but one can’t be sure. Whatever the situation, cow looks as if she’d know the truth. 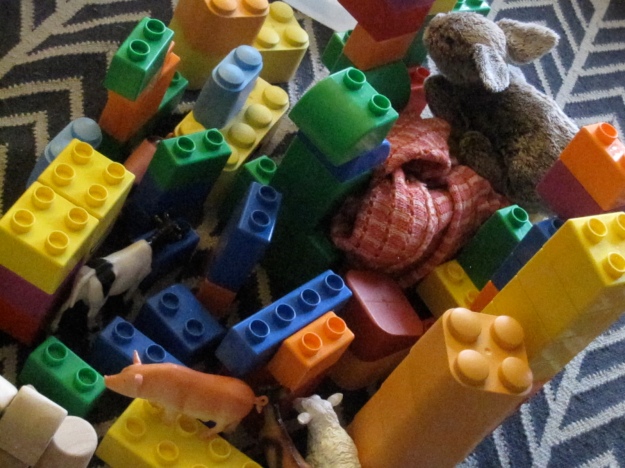 When the legos were used up MJ still wanted to build, so we decided to pull out the plain wooden blocks. With these she grew more careless, strewing them about with little thought or care. The result was what can only be described as urban sprawl. For shame!

I tried to talk to her about overdevelopment, slumlords, the perils of squatters. She wasn’t moved. To the contrary, she insisted on continuing to build. More! Uglier! Faster! Great. She’s my own little Westfield, in elelphant pajamas.

Then again, she did, at least, offer to build a library — I think as a conciliatory gesture. Unfortunately the structure was never finished. Why am I not surprised?

Moments after, MJ decided she wanted a “new city.” She destroyed the old one completely — a toddler Christian sacking a toy Constantinople. Animals were unhoused, blankets thrown asunder, books destroyed. Keening and wailing — imaginary, of course — resounded throughout the land. Or at least our living room.

As for MJ? She went into the kitchen to eat a crusher, got distracted, and never returned.

This, I guess, is what happens when you raise a child in Los Angeles. Or when you read too many histories of the Crusades. Or both. Perhaps I need to buy Myra-Jean some Lincoln Logs and try to get her back to her roots. And maybe I should read something more contemporary. A biography of Frank Gehry, perhaps?