My husband’s ex-girlfriend was, from all I can gather, the diametric opposite of me in nearly every regard. I live in jeans and tee-shirts; she was a clothes horse. I think of milk crates as legitimate furniture; she was an interior designer. I am so daunted by the notion of choosing colors for my walls that I just leave everything white, then complain about it endlessly; she was once on the cover of Dwell Magazine.

But our differences are most glaringly exemplified by the fact that Mike’s ex ironed her sheets. It was a skill — and habit — that she learned from her mom, who was, by all accounts, a formidable woman and something of a domestic master herself. That lady, whom we will refer to as the-ex-in-law, not only ironed her sheets, but did so after sprinkling them, sealing them in a zip loc bag, and refrigerating them overnight.

From these women Mike learned many things. (He was, after all, with his ex — and ex-in-law — for seventeen years!) Among them was — of course — a love of sleeping on ironed sheets. But not only that. He learned how to cook sensational Thai curries. How to live in a home that was regularly being photographed for magazines. How to throw brunches for twenty. And…

How to fold like he’d worked at J Crew all his life.

Fold what? Well, shirts, underwear, suit-jackets, jeans, (“always hold them from the ankles!”), napkins, tablecloths, and even…the dreaded contour sheet. Which Mike can wrangle, in seconds, into a book-sized package of linen-y perfection, corners so crisp, lines so clean, profile so smooth, it looks like it’s straight out of the original packaging.

Then there’s me. I come with other good traits. I sing “I Once Had a Mule and His Name Was Al.” Or at least half of it. I make a mean (or at least an ill-tempered) stir-fry. My band was once on page 142 of a magazine. I’m a decent, if eccentric mom. I weave beautifully in traffic. I read long books expeditiously!

I do not, however, iron sheets.

OK, I do not really iron anything. I did — inspired by the example of my predecessor — once try the sprinkle/refrigerate/press routine, but it went, um, awry. In short: I put the shirts in too wet, didn’t wrap them well enough, and forgot about them until three days later. In the interim they fell all over the bottom of the fridge, began to mildew, and got some sort of sticky orange substance on them. They all had to be re-washed. Twice. I believe they are still at the bottom of the ironing pile, dry and listless, licking their collective, cottony wounds, and hoping I don’t come anywhere near them.

As for folding? Not really. It’s more of an organized roll.

Anyway. The point is, Mike accepts me as I am. I think. And we are very happy.

But every time I fold a wrinkled-but-clean sheet I feel a tiny shudder coming from his direction, and when it’s a contour sheet it’s a downright temblor. 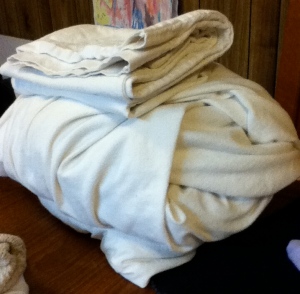 (At least the pillowcase looks relatively normal. I might even be able to iron it, if you gave me time.)

4 thoughts on “A Wrinkle In Mine”