Well, the entire second terrace is, at this point, classifiable as a disaster. I think we can safely say a few things: designing your layout in the dark is a bad idea. b) Sticking cuttings in the ground after leaving them out in the sun for a week and expecting them to thrive is the ultimate in wishful thinking. c) “Wishful thinking” is a nice way of saying “I’m an imbecile.”

I believe I am going to tear the whole thing out and start over. With what, you may ask? Well, I’ve purchased another lavender plant from the farmer’s market, and I can start with that. The first one I bought is thriving beautifully in the terrace below, so I have reason to believe this one, too, can succeed. I also aim to go out and buy a few more purple ice flowers, as they are doing spectacularly well where I’ve planted them. It’s extremely gratifying. Not just that they’re not dying, but that they are actually spreading, blooming, blossoming, in the true sense of the word. Their shoots are spreading outwards, their roots have taken firmly to the spot, and their buds have multiplied exponentially. Like true sun worshippers, they perform the neat trick of opening wide during the day, then half-closing as dusk comes on. Beautiful.

Maybe I should just fill my entire garden with these two plants: ice and lavender. Worse things could happen. It does sound a little too much like a Fleetwood Mac song, but still. It could be pretty. I don’t generally adore purple, but I will say it looks fetching out front, and offsets the sickly beige of our house as well as anything could. Plus, the bees seem really appreciative, and they certainly deserve a break…

Perhaps the trick is not to be overly ambitious, and just stick with a few things that you can do well. A gardening approach, or a life philosophy? You figure it out. I’ll be out front, razing my failures. 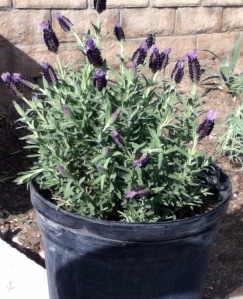