The Lord giveth, and the Lord taketh away. So, apparently, does Tom, our floor guy.

He came yesterday to fix the ominous hole that appeared in our new oak floors a month ago. He was very apologetic, and worked diligently for three hours, popping out the bad board, cutting a new one to replace it, fitting it in, then sanding and finishing it. The results were great — you’d never know there had been a problem there.

In fact, other than Mina barking ferociously from the utility room –where I’d confined her — the entire time he worked, all went as smooth as silk.

Then, on his way out, Tom knocked over our best planter. SMASH CRASH! Dirt, earthenware, and snake plant were everywhere.

There were prodigious apologies. Tom felt awful. He immediately offered me money to cover our loss. And believe me, I was plenty upset. I loved that planter. It was a gift from my dad and step-mother — one of those gorgeous, we-could-never-afford-it-ourselves-but-we-sure-like-having-it things that made the front of the house look less dilapidated than it actually is. On the other hand, I felt badly. The guy had just spent three hours at our house fixing a measly little hole in our floor. He wasn’t gonna get paid for it. He didn’t have to do it. Of course, the hole was sort of his fault, but still…he works with his wife, for God’s sake. They’ve been married forty-five years. I couldn’t take his money.

We went back and forth for what seemed like forever. Over my protestations Tom finally dropped a ten dollar bill on a side table, saying:

“At least this. I feel so terrible.”

I let him leave it.

When he was gone I went back to get a fan from the utility room. As if the situation weren’t irritating enough, the fumes were getting to me as well.

I opened the door to find that Mina had puked everywhere. Among other things I learned this by stepping in it. In my socks.

Officially grouchy now, I returned to the living room. Opening the front door, I looked again at the carcass of my planter. It looked like there should be a chalk outline around it. Jesus.

Mike called. I told him I was in a bad mood. Really. When he asked why, I explained. The fumes. The wet socks. The crime scene on our front steps. Finally I told him about the donation I’d allowed Tom to make.

I know. I really screwed the pooch. What the hell was I thinking?

All in all, though, we still got a good deal on the floors. I guess a planter isn’t too much to pay for a conscientious contractor. Our bedroom looks beautiful again. The front of the house? Well, we usually use the back entrance anyway. 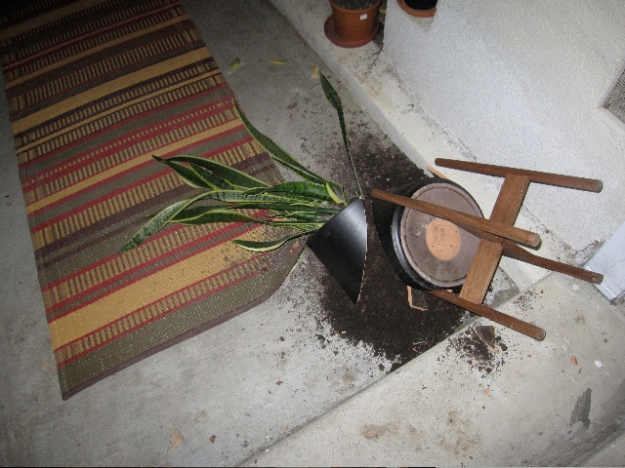